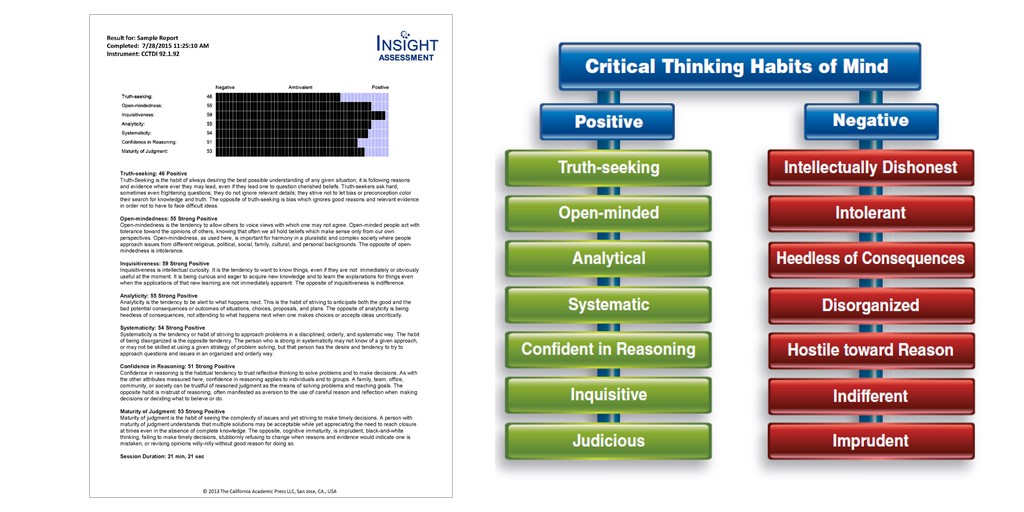 The California Critical Thinking Disposition Inventory CCTDI measures seven components of aspect of the overall disposition toward using one’s critical thinking to form judgments about what to believe or what to do:  Truthseeking, Open-mindedness,  Analyticity, Systematicity, Confidence in Reasoning, Inquisitiveness and Maturity of Judgment.

People may be positively, ambivalently, or negatively disposed on each of seven aspects of the overall disposition toward critical thinking.

Truthseeking is the habit of always desiring the best possible understanding of any given situation; it is following reasons and evidence where ever they may lead, even if they lead one to question cherished beliefs. Truth-seekers ask hard, sometimes even frightening questions; they do not ignore relevant details; they strive not to let bias or preconception color their search for knowledge and truth. The opposite of truthseeking is bias which ignores good reasons and relevant evidence in order not to have to face difficult ideas.

LnRiLWZpZWxkW2RhdGEtdG9vbHNldC1ibG9ja3MtZmllbGQ9IjNhMDQwZjI2YmFjY2ExZjMzYThjODgyMTMxMWQyNTk2Il0gYSB7IHRleHQtZGVjb3JhdGlvbjogbm9uZTsgfSAgQG1lZGlhIG9ubHkgc2NyZWVuIGFuZCAobWF4LXdpZHRoOiA3ODFweCkgeyAudGItZmllbGRbZGF0YS10b29sc2V0LWJsb2Nrcy1maWVsZD0iM2EwNDBmMjZiYWNjYTFmMzNhOGM4ODIxMzExZDI1OTYiXSBhIHsgdGV4dC1kZWNvcmF0aW9uOiBub25lOyB9ICAgfSBAbWVkaWEgb25seSBzY3JlZW4gYW5kIChtYXgtd2lkdGg6IDU5OXB4KSB7IC50Yi1maWVsZFtkYXRhLXRvb2xzZXQtYmxvY2tzLWZpZWxkPSIzYTA0MGYyNmJhY2NhMWYzM2E4Yzg4MjEzMTFkMjU5NiJdIGEgeyB0ZXh0LWRlY29yYXRpb246IG5vbmU7IH0gICB9IA==
Open-mindedness is the tendency to allow others to voice views with which one may not agree. Open-minded people act with tolerance toward the opinions of others, knowing that often we all hold beliefs which make sense only from our own perspectives. Open-mindedness, as used here, is important for harmony in a pluralistic and complex society where people approach issues from different religious, political, social, family, cultural, and personal backgrounds. The opposite of open-mindedness is intolerance.

Systematicity is the tendency or habit of striving to approach problems in a disciplined, orderly, and systematic way. The habit of being disorganized is the opposite tendency. The person who is strong in systematicity may not know of a given approach, or may not be skilled at using a given strategy of problem solving, but that person has the desire and tendency to try to approach questions and issues in an organized and orderly way.

Confidence in reasoning is the habitual tendency to trust reflective thinking to solve problems and to make decisions. As with the other attributes measured here, confidence in reasoning applies to individuals and to groups.  A family, team, office, community, or society can be trustful of reasoned judgment as the means of solving problems and reaching goals. The opposite habit is mistrust of reasoning, often manifested as aversion to the use of careful reason and reflection when making decisions or deciding what to believe or do.

Maturity of judgment is the habit of seeing the complexity of issues and yet striving to make timely decisions.  A person with maturity of judgment understands that multiple solutions may be acceptable while yet appreciating the need to reach closure at times even in the absence of complete knowledge. The opposite, cognitive immaturity, is imprudent, black-and-white thinking, failing to make timely decisions, stubbornly refusing to change when reasons and evidence would indicate one is mistaken, or revising opinions willy-nilly without good reason for doing so.